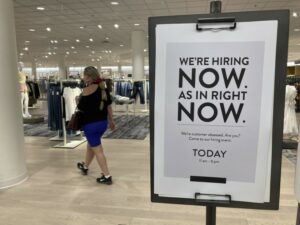 According to a recent survey conducted by Joblist among 13,000 job seekers, more than half of U.S. hospitality workers would not go back to their old jobs, and over one-third aren’t even considering reentering the industry at all. This is regardless of potential pay increases or other incentives that employers could offer. These former hospitality employees cited wanting higher pay, a less physically demanding workplace and better benefits.

With job openings within the hospitality industry climbing to record numbers, the struggle to fill spots is threatening to slow overall recovery. While some factors keeping people away from the labor market may ease in coming months – including childcare struggles and the expiry of emergency unemployment benefits – other changes could take months or years to work out. These changes include a mismatch of skills and locations between employers’ needs and the unemployed, early retirement and lower seasonal migration.

Across the U.S., the leisure and hospitality industry is still down 2.2 million jobs from February, a big chunk of the roughly 6.7 million missing jobs across occupations. That’s despite businesses largely reopening and employers saying they’re desperate for workers. Read more.